Armonico Consort is launching a brand new series of streamed concerts to enjoy at home, anywhere in the world, with a collection of filmed performances released from Monday 8 March 2021.

Conducted by Artistic Director, Christopher Monks, the concerts have been beautifully filmed and feature some of the critically-acclaimed choir’s favourite early music repertoire.

Find out what’s on our on demand streamed concerts service

The first two concerts, both released on 8 March, feature a masterpiece of Spanish Renaissance polyphony – Victoria’s Requiem in six parts – and Naked Byrd, with choral gems such as Barber’s Agnus Dei and Allegri’s Miserere, interwoven with the timeless chants of Hildegard von Bingen.  Naked Byrd is one of the choir’s most popular programmes and the CD earned 5 star ratings in the national press.

Alongside the new films will be a library of previously released concerts made during the past few months, including Byrd’s 4-part Mass and Purcell’s opera, Dido and Aeneas.

So, while we’re waiting in the wings to return to live concerts, we’re bringing the concerts to you to watch on demand and, crucially, keeping our wonderful freelance musicians in work.

You’ll find all the details on our dedicated concert streaming page or take a look at the brochure below. 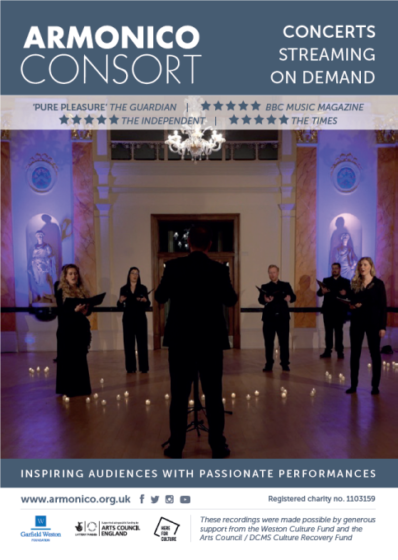