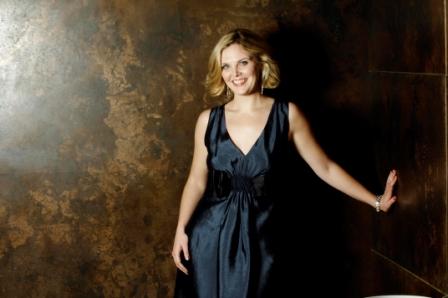 What is the connection between University Challenge, the Royal Wedding between Meghan Markle and Prince Harry, the Paralympic Games, and Armonico Consort? The answer is, they have all featured appearances by the star soprano Elin Manahan Thomas, who appeared in a University Challenge Christmas Special, representing Clare College Cambridge (a Choral Scholarship there had enabled her to take a degree in Anglo-Saxon, Norse and Celtic).

“That’s a good question,” she tells me from her Sussex home, “and it might surprise you to know that I find the bigger-scale stuff easier in many ways.

When there’s a billion or more tuning in, it’s still only a billion lots of one

“I’ve always felt that performing is performing, whatever the size of the audience. I tend to imagine that I’m relating a story, or a musical message, and I focus on just one person who I hope will listen. When there are a billion or more tuning in, it’s still only a billion lots of one, and that’s far too big to fathom so I focus on the one alone.

“In smaller venues, with an audience that’s visible and each face close to you, it’s lovely and intimate, but sometimes strangely more daunting, because you can’t help but read people’s reactions. University Challenge was surprising because of its studio audience, but it was great fun, and Jeremy Paxman much kinder in real life than I had feared!”

Two of Elin’s specialisms are baroque and contemporary music. Does she find any parallels between the two genres?

“I do! For me, it comes down to the honesty of the music, and the simplicity of the line. Baroque music is founded on solid harmonic patterns, and it needs good clear lines to make the music work. And it’s the same with contemporary repertoire – keeping the shaping as pure as possible.

“21st- century music is also exciting because of the humanity of its themes, and the expressivity that allows us to share emotions through our voices, and this is something that was absolutely started by the Baroque masters. From, say, Handel, Vivaldi and definitely Bach, to today’s freshest new compositions, there’s a direct line of emotional expression as well as harmonic invention.

“As it happens, I’ve performed both baroque (Handel, Bach, Purcell and Vivaldi) and brand new (Toby Young’s amazing Beowulf’) with Armonico Consort and its artistic director Christopher Monks, and I’m a huge fan of the way we make sure the music is vibrant and colourful, and speaks to everyone, whatever the repertoire.”

Elin’s current involvement with Armonico Consort is as soprano soloist in the mighty Bach Mass in B minor, to be performed in a variety of venues over the next few weeks. Having sung in this masterpiece so many times, she has encountered many conductors each with their different approach.

“I think that the variety in expression and interpretation is the best thing about my job,” she reflects. “No two performances will ever be the same, even of the same work. The B minor Mass is without doubt my very favourite thing to sing: it moves effortlessly and beautifully between the grand and solemn, to the brash and gleeful, to the intimate and hushed. Bringing out these contrasts, while maintaining the arc of the liturgical meaning, is so exciting when you perform it, and each conductor’s relationship with it then informs and enthuses us, the singers and players.

“The wonderful thing about Armonico Consort’s version is that the soloists step in and out of the chorus, making it all seem so fluid and natural. It also has a great liveliness to it, which keeps the music fresh and makes it seem relevant, even if the words aren’t familiar.”

Are there any works that Elin has yet to perform in, and would love to?

“I’m lucky in that I seem to have covered so much of the repertoire I have always wanted to do – it’s been a busy twenty years in the industry! But I love discovering new music, be it brand-new compositions, or centuries-old songs that I happen not to have sung yet. And there’s nothing better than going back to stuff I learned many years ago, and coming to it with a new approach and different ideas: that’s the joy of music, it honestly is the gift that just keeps giving.”

She goes on to tell me how much her Welsh roots mean to her. “It means everything! I’m very lucky that I grew up naturally speaking two languages, and surrounded by a culture that places so much emphasis on the arts, and particularly on music. I live in Sussex because of work, but my parents are still in Swansea so I’m there regularly – probably more regularly than they would like!

“I feel as if I’ve grown a branch of Wales in our village near Brighton, and my family all understands Welsh and can speak much of it. I’ve also founded and directed a choir in my children’s school for the past few years, to emulate Welsh school choirs – complete with songs in my mother tongue which the children have learned admirably!”

Performing with Armonico Consort, where I started out almost fifteen years ago, is thrilling and a real joy

And we end with a return to Elin’s enthusiasm for the Bach masterpiece. “I’m looking forward very much to this tour of the B minor Mass – it really is my favourite piece to sing and it’s such an impactful work, I love seeing the audience’s faces at the start of the Gloria and the Sanctus, and that last epic Dona nobis pacem is just unforgettable. Getting to perform it with Armonico Consort, where I started out almost fifteen years ago, is thrilling and a real joy.”