I’d never been part of a choir before, the idea had never crossed my mind, I’m a fan of music but not particularly musical (and the less we talk about my singing, the better!). It was only after Armonico Consort performed at our office during the Christmas festivities, encouraging everyone to join in, did I think ‘this is a lot of fun’. I’d not heard of Armonico Consort before but didn’t need much convincing from them to join; the small amount of doubt or nervousness that I had was brushed aside quickly. The rehearsals have been a real eye opener for me, especially the work that Patrick, our ‘composer’, has been putting into producing the song, from arranging the groups and sections to coordinating us to sound quite good. Needless to say, he has probably had a good laugh with us as well, seeing us mumble, mistime, or completely forget the words, not to mention his odd misplaced key for dramatic effect. I have to give him big kudos for making the experience very easy and accommodating; I think a lot more people would have dropped out if it wasn’t fun. I will miss the weekly rehearsals after we reach the end of March, especially as often there were only a handful of male tenors, leaving us wholly outnumbered by the female sopranos and altos – it made for some very interesting and hysterical moment when things didn’t go quite to plan. I look forward to the performance at the Royal Albert Hall, fingers crossed that it all comes together nicely. This has been an adventure and a learning experience, but most of all, it has been such good fun. 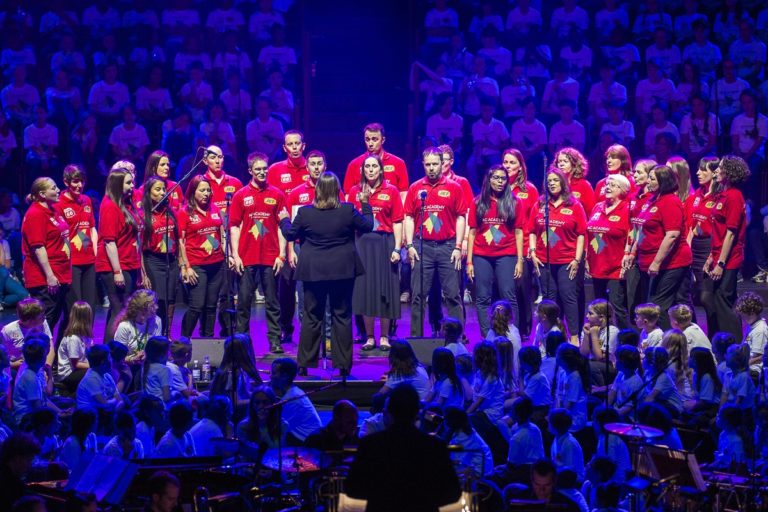 I moved down to London from the Warwick office in January, so was looking for new things to get involved in at work. When I heard about the choir, I knew instantly that it was for me: I have been in numerous choirs in the past, so it was pretty much guaranteed to be something that I would enjoy and remember throughout my time at P66. I also thought that it would help me to integrate better with my new surroundings and others in the office, which I was keen to do.

As soon as I entered the room, the atmosphere immediately felt relaxed. There are no auditions, and it isn’t necessary to have any musical background to join, so there is no pressure! The choir leader has a great sense of humour, and always makes everyone feel at ease. He makes the sessions fun with various warm-ups designed to get us feeling energised, and mainly involve us making strange noises that no doubt sound very odd to passers-by getting their lunch. We sing several songs from a mixture of genres and the songs are taught without sheet music, making it suitable for all to join in.

I have really enjoyed being part of the choir so far: it is a great way to spend the lunch hour, as it is a chance to have some fun and relax. It’s nice to be able to take a break from work for a while to have a good sing and learn some new things. I am really looking forward to getting to perform at the Royal Albert Hall in March, as it is an amazing venue and will be something to remember!