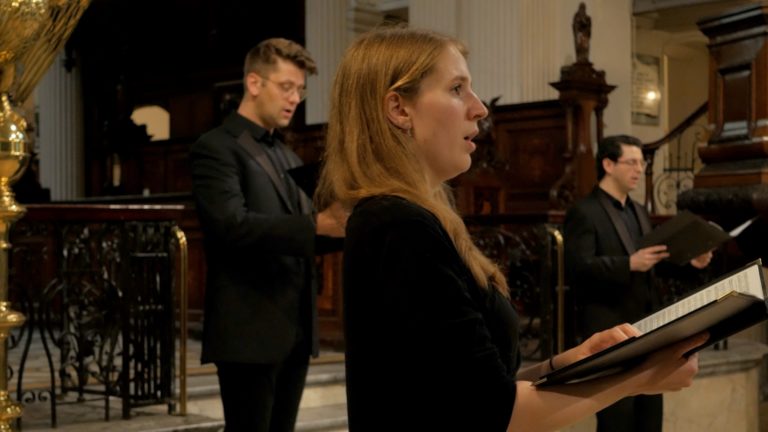 Members of the critically-acclaimed Armonico Consort, led by its newly appointed associate artistic director Geoffrey Webber, have once again come together to inspire and entertain audiences with their versatility both as soloists and ensemble singers. Programmes vary from those with music at the heart of Armonico Consort’s core repertoire from the Renaissance and Baroque eras to music from the Romantic and modern periods: masses, madrigals, catches, duets, songs, partsongs and close harmony. We are also offering an Illustrated Lecture-Recital on the hidden musical accomplishments of the girls and young women in Georgian London’s Charity Institutions.

Purcell’s famous solo ‘Tis Nature’s Voice opens an enchanting programme of vocal music with piano in touch with the fragile world of nature, including Stanford’s The Blue Bird and Delibes’s Flower Duet. As a longstanding inspiration for artists across the centuries, nature appears in this programme through the works of Renaissance masters Palestrina and Byrd to the music of the Romantics Schumann and Schubert, as well as in the jolly catches extolling nature’s exuberance. From insects – Gounod’s The cricket and the ant – to the beauteous landscape evoked in Finzi’s White-flowering days, our musicians delve into all the facets and forces of nature.

The sun, moon, planets and stars align with music for a concert of heavenly musical delights. This astronomically varied programme includes those Renaissance composers who took inspiration from the music of the spheres (Monteverdi, Dowland) to the composers of the Romantic era (Schubert, Schumann), who were captivated by the moon. With a mixture of ensemble, upper-voice pieces and solo numbers, the concert will also feature familiar music from Holst’s The Planets, and the classic My Soul, there is a country from Parry’s Songs of Farewell.

A rare opportunity to hear Monteverdi’s own version of his iconic 1610 Vespers, performed with voices and continuo only. Monteverdi’s 1610 collection, one of the most impressive sacred collections of music ever composed, is a masterpiece of the early Baroque era. Monteverdi assembled the collection as a showcase of his talents in order to boost his chances of employment, and he cleverly organised the scoring of his music so that Vespers could be performed either with large or small forces. This performance will be given by 8 singers, theorbo, ‘cello and organ.

The magic of carols by candlelight! We celebrate Christmas with music from the medieval period to the present day, with many of the most loved a cappella carols, including the peerless beauty of A spotless rose by Herbert Howells. A church venue will be an ideal option for this celebration of the music that helps to make Christmas so special.

Between Henry VIII’s Reformation and the defeat of the Spanish Armada under Elizabeth I, the 1550s were a pinnacle of England’s Renaissance musical mastery. Queen Mary’s Catholic rule inspired a wealth of Latin polyphony which matched the intricate beauty and dissonance of the music in the land of her husband, King Philip II of Spain. Featuring a pre-concert talk by Dr Geoffrey Webber describing this extraordinary pocket of music history, the concert will begin with Mass for Four Voices by Tallis, interspersed with motets by Guerrero, followed by the Missa Caça by Morales, with motets by Sheppard.

Following her research at the University of York, Rachel Webber tells the forgotten story of the impressive musical accomplishments of the girls and young women of the charitable institutions in Georgian London. Their sparkling musical performances attracted many admirers, and much music was composed specially for them in the most fashionable style of the day. The music included in this lecture was not part of the all-male establishment, but comes from institutions such as the Asylum for Female Orphans, and the Magdalen Hospital which sheltered former prostitutes, and features music composed by both men and women. The lecture can be delivered with music performed by a local children’s choir (school, church or regional) with its own director, or with singers from the Armonico Consort Soloists.