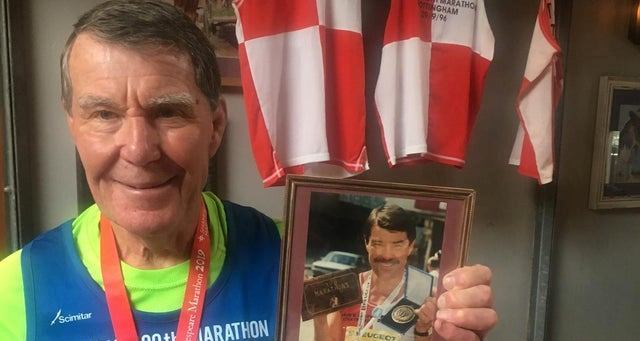 Conductor’s Circle member, David Phillips MBE, has a passion for music of the Renaissance and Baroque eras and for running marathons – 500 of them! Our Relationship Manager, Patrons and Sponsors, Eva Williams, chatted to the Kenilworth-based accountant about his 19-year involvement with Armonico Consort and the personal fundraising projects that have earned him the MBE.

Having been awarded your MBE in the 2020 New Year Honours List, it would be fascinating to know how this will be presented under the current coronavirus situation?

My wife Robina and I, son Gareth and daughter Anna, had booked to go to London on 23 April to be presented with my MBE at Buckingham Palace but, of course, this was not possible. I did receive an email from the Cabinet Office informing me that it had been postponed and to wait to hear when it would be presented… I’m still waiting.

You’re fondly known as the Marathon Man and your MBE recognised you for your astounding fundraising efforts, especially for the Brain and Spine Foundation charity. You were due to run in the London Marathon this year, which you’ve participated in since 1988 – your 501st marathon I believe – now that this been postponed will you run a lockdown marathon in your garden? Are there any fundraising tips you could offer Armonico Consort in these difficult times?

I won’t be running the Marathon in my garden but I will be running the London Marathon and also the Snowdonia Marathon – rescheduled for October. I’ve got a target of £10,000 and have raised over £7,000 so perhaps by October I’ll have reached my target.

The only tip I can offer Armonico Consort, in what is a difficult and unusual time for all charities – especially as the NHS and medical causes are high priority for people – is to focus on the power of the email. I emailed everyone I knew and set up a virginmoneygiving.com link to make it easy for people to donate online… it seems to have worked.

How and when did you personally get involved with AC’s work??

About 19 years ago I went to Scarlatti’s Dixit Dominus – Dame Emma Kirkby was performing at St Mary’s Church in Warwick – it was the first Armonico Consort concert I had been to and straight after it I bought the CD. I thought it was out of this world!

At this concert I happened to be sitting next to Christopher Monks’s mother (unbeknown to me at the time) and asked her who the conductor was and how I could make contact. I made contact and asked Christopher to stage this concert again and I offered to sponsor it. They were actually performing music that I wanted to hear.

I go to a lot of choral events – choral music was part of my upbringing. I was head choir boy at St James’s Church in Styvechale in Coventry, and at the age of eleven I was one of twelve choir boys who sang in front of the Queen at the laying of the foundation stone of Coventry Cathedral.

In 2010, I received a letter from Christopher inviting me to become an Ambassador as part of AC’s ‘Big Mouth Appeal’ – I was delighted to get more involved with Armonico’s work and have enjoyed supporting them ever since.

Which aspect of AC’s work excites you?

Choral music is what excites me most and I know that Christopher loves this too. I love Giovanni Gabrieli and Claudio Monteverdi and generally music of the Renaissance and Baroque periods.

More recently I researched and found new composers on YouTube and suggested a couple to Christopher. He agreed, and months later staged Striggio’s Mass in 40 & 60 Parts and Biber’s Salzburg Mass in 53 Parts. There’s a huge commonality in the music that’s close to my heart and that Christopher loves.

Such long forgotten or undiscovered music is not often heard or recorded so to have these performed live is such a joy and even more so because they have been sell-outs. Biber – 400 years on – hasn’t died yet. I can’t see Justin Bieber’s music being around in 40 years!

Why did you join Armonico Consort’s Conductor’s Circle and when?

I was invited to join back in 2010 and it was an honour… it was an offer I couldn’t turn down. It also meant having more of an influence on the content of performances; offering ideas and suggesting new composers and pieces that people might like to hear. Next year, for example, when Armonico Consort celebrates its 20th anniversary and Coventry is the UK’s City of Culture, Christopher and I are working together on Biber’s Salzburg Mass in 53 Parts.

The Conductor’s Circle also enables me to bring music that I love to people who have never heard it before. Funnily enough, I bumped into a patron who had travelled from Cornwall to Striggio’s Mass at Coventry Cathedral and who thanked me for introducing him to a composer he’d never heard of… that was a special moment for me.

You’ve had an accountancy firm in Kenilworth, Warwickshire for over 45 years – how have your financial and business skills come in useful in your dealings with Armonico Consort?

From time to time we have acted as independent accountants to certify Armonico Consort’s accounts and I know that as a charity it is reliant on donations. I know that concerts need sponsorship therefore I sponsor through my company – otherwise these concerts just wouldn’t happen. I know the importance and value of sponsorship; it’s the key to a lot of concerts, even more so under the current coronavirus climate.

Your company very generously sponsors Armonico Consort’s Carols by Candlelight concert every year – is there a particular reason your company chose this particular concert to sponsor?

We sponsor two concerts every year and Carols by Candlelight is particularly close to my heart because every year it is different… a different form of carol service, not the usual carols but some beautiful and rare music. We like the different formats that Christopher manages to conjure up each year – from the music to the readings and the readers; I particularly remember Oz Clarke’s reading…his comic timing was brilliant and it was great to enjoy the humorous side of Christmas! It’s definitely different from any other carol service you’re likely to go to.

This concert fills St Mary’s Church in Warwick every year and if it wasn’t there, I think the local community – adults and children – would miss something very special.

What’s the most joyous and memorable AC concert you’ve attended and why?

Last year, my wife Robina and I went to Warwick Arts Centre for Hallelujah! Handel’s Messiah… what a Christmas treat. I was just blown away by having soloists not only performing their specific pieces but also there as members of the choir and performing throughout. I thought it made a huge difference and what Christopher achieved was pretty special – well done!

I know that over the years you’ve introduced our Artistic Director, Christopher Monks, and the AC team to undiscovered Baroque and Renaissance music – could you highlight one that was taken from your idea to being performed and how did you feel when you attended this performance?

Over the last few years, Armonico Consort has gained a reputation for its daring programmes including presenting motets from the 16th Century in a form of mediaeval surround sound. Thanks to my research, in 2014, Christopher staged Supersize Polyphony in Warwick at St Mary’s Church.

This was based on the rarely performed Mass by Striggio – ‘Ecco Si Beata Giorno’, composed in 1565-66. It not only advances from Tallis’s masterpiece ‘Spem in Alium’, but also goes much, much further with an Agnus Dei going into 60 different parts!  Because of their scale and complexity, performances of these works are rare across the globe.

It was fascinating to have been involved in helping Christopher in the staging aspects of this performance, especially in locating the choirs in all parts of St Mary’s Church as there is no balcony there. And having the English Cornett & Sackbut Ensemble playing period instruments made it very special.

So, in 2018, I was absolutely delighted when Armonico Consort performed Striggio’s Mass again … this time in Coventry Cathedral… it was equally sublime. It gives me great pleasure to know that so many more people have now heard of Striggio.

There’s more information on the many ways in which you can support Armonico Consort’s performance and education work (AC Academy) on our Get Involved page.